Finding I am Late to this Discussion...but a Recent Homily with My Religious Community...The Cure of the Centurion's Gay Lover... 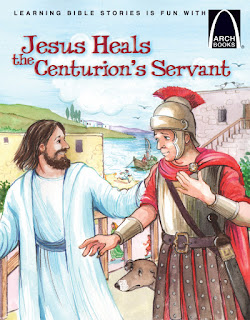 How to begin this today? First let me say a word of thanks to all of you who have taken a turn here to preside and be the homilist at these meetings. I had a turn early on and then decided to pass the opportunity around.  Thank you.

For this Mass today I was looking around to find someone to be the presider/homilist and finally decided, well it might be my turn again. Then I looked at the readings. Surprise! This passage about the centurion and his servant in Luke; there is also a version in Matthew, have been favorites of mine. I thought about resisting the chance to say something on this topic. I could talk on Pope Cornelius. Well, I decided to go with a reflection on the gospel and hope that it would also fit in with our call to reach out to the outsider, folks on the margins.

In Luke’s account, Jesus praises the centurion’s faith as greater than any he has seen in Israel. It is one of many examples of faith in Luke’s gospel. There might be an invitation here for us to see examples of faith beyond our own community, beyond our own church. Simply celebrate faith when and where it appears. The Jesus of Luke’s gospel never preaches directly to the Gentiles. That only happens in Acts.

In searching for some material on today’s gospel, I at one point ended up at the Wikipidia site, then scrolling down, saw this headline; “Homo-erotic connotations of the passages in Mt. 8 and Lk. 7.” Reading through a list of scripture scholars under this heading I saw a name I recognized. It stirred a very dusty memory, Daniel A. Helminiak.”

This is the old memory, twenty to twenty-five years ago at a gathering of one of the national groups I belonged to at that time, I had the honor and privilege of introducing Daniel A. Helminiak. I cannot remember the group or where it was. It was likely a New Ways event. I also probably have a book or two of Helminiak’s.

For some reason, probably I was familiar with the group and he was not; I was asked to introduce him. So, little ole me introduced Daniel Helminiak who is described on his own web site which I discovered yesterday as an "Author, Lecturer, Psychotherapist, Priest and Theologian, and Psychology Professor."

This is a portion of how he described himself. “I grew up in an intensely devout Polish Catholic community in Pittsburgh, Pennsylvania, USA. Having entered seminary at a tender age of seventeen, I was ordained a Catholic priest in Rome. Until my retirement in mid-2018, I served as a full Professor in the humanistic and transpersonal Department of Psychology at the University of West Georgia, near Atlanta."

This is for our reflection today. Here is Helminiak’s comment on the passage from Luke’s gospel this morning;  "Matthew 8 and Luke 7 present parallel accounts of Jesus' curing the centurion's  servant. The Greek reads 'pais' (boy, slave) and contrasts in the passages with the term that refers to the other slaves 'doulos' (servant, slave). Luke also notes that the boy was 'dear' to the evidently wealthy centurion. Not the cost of a slave nor a mere youth's experience and skill, but only emotional attachment would explain 'dear.' In extra-biblical usage, 'pais' was sometimes used to refer to a man's male lover. Very likely, the boy was the centurion's lover. Jesus cured the boy, restoring the relationship and commending the centurion's faith.”

This is my reason for considering Luke 7 and the cure of the centurion's servant as one of my favorite scripture passages. We use similar words that the centurion used and who Jesus praised for his faith every time we welcome Jesus in the Eucharist; “Lord I am not worthy that you should enter under my roof but only say the word and my soul shall be healed.” That is the reason I am partial to this passage.

A final thought. At a recent community meeting we passed a resolution to invite Fr. James Martin, SJ to speak to us. I was not around for the voting, but I was told that the resolution passed with a significant positive vote.

The fallout. Later that day I was visited by one of my superiors who told me that he was confused by my homily. Like many Roman Catholic communities, we are grappling with pedophilia issues. He warned me that I should be more aware of that. I told him that I was aware of the pedophilia implications but decided to offer these reflections today. I told him I was sorry if he was offended. I said that I was aware of the whole Roman man/boy relationship. In parting he said to me that his criticism applied to other types of relationships. I did not respond.

In going back and looking at more of what Daniel Helminiak has to say on this; he writes in his book Sex and Sacred that it is hard to know what would have been in Jesus mind at the time. Helminiak then says that if Jesus did not condemn the centurion for his apparent homosexual relationship, he certainly missed a key opportunity to condemn homosexuality.

Catholic Bishops Distracted and maybe rightly so. Where is the concern for the poor in the present wall/border crisis? 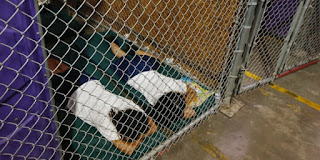 I am feeling sorry for us catholics and others who are not getting much leadership from their shepherds these days.

In the past with all the violations of care happening on the border and Trump's created hysteria of a wall, there would be us bishops ready to be arrested. Are they still supporting Trump?  Are us bishops so preoccupied with their failures on the sexual abuse crisis that they have no time for those other least among us?

During the civil rights era bishops, priests, nuns, lay folks were on the front lines. That all seems to be lost in the Trump era.

Bishops speak out, but more action is needed.
Posted by wild hair at 6:01 PM No comments:

The Pope in Ireland with the Irish Prime Minister

Here is my reflection which I shared with the congregation I was with this morning. I did soften the paragraph by the Irish Prime Minister which talked about Ireland's modernization in parliament and by referendum of laws to bring the country into the 21st. century.

In close to fifty years, I have seldom quoted the pope, but I did so today. I do celebrate Ireland, I honor some of my roots. Perhaps Ireland can lead the church once again as it has done in the past. I am thinking of the Irish Penitentials. I think the Prime Minister's remarks were prophetic.

I think this Sunday is the final Sunday with these readings from John’s gospel on the Bread of Life and the Words of Ever Lasting Life. I found myself attracted to the words of both the Pope and Prime Minister of Ireland, each in their own way who echoed in their remarks, words of everlasting life.

The Prime Minister of Ireland “Together we are guided by your words: ‘Make bridges, not walls, because walls fall.’” “The Ireland of the 21st century is a very different place today than it was in the past. Ireland is increasingly diverse. One in six of us were not born here, and there are more and more people who adhere to other faiths, or who are comfortable in declaring that they subscribe to no organised religion.

We have voted in our parliament and by referendum to modernise our laws – understanding that marriages do not always work, that women should make their own decisions, and that families come in many forms including those headed by a grandparent, lone parent or same-sex parents or parents who are divorced. Holy Father, I believe that the time has now come for us to build a new relationship between church and state in Ireland – a new covenant for the 21st Century. It is my hope that your visit marks the opening of a new chapter in the relationship between Ireland and the Catholic Church. Building on our intertwined history, and learning from our shared mistakes, it can be one in which religion is no longer at the centre of our society, but in which it still has an important place.”

For his part, this is some of what Pope Francis had to say; “As you know, the reason for my visit is to take part in the World Meeting of Families, held this year in Dublin.

The Church is, in a real way, a family among families, and senses the need to support families in their efforts to respond faithfully and joyfully to their God-given vocation in society.

One need not be a prophet to perceive the difficulties faced by our families in today’s rapidly evolving society, or to be troubled by the effects that breakdown in marriage and family life will necessarily entail for the future of our communities at every level.

Families are the glue of society; their welfare cannot be taken for granted, but must be promoted and protected by every appropriate means. It was in the family that each of us took his or her first steps in life. There we learned to live together in harmony, to master our selfish instincts and reconcile our differences, and above all to discern and seek those values that give authentic meaning and fulfilment to our lives.

It is my prayer that Ireland, in listening to the polyphony of contemporary political and social discussion, will not be forgetful of the powerful strains of the Christian message that have sustained it in the past, and can continue to do so in the future. With these thoughts, I cordially invoke upon you, and upon all the beloved Irish people, God’s blessings of wisdom, joy and peace. Thank you.”
Posted by wild hair at 6:58 PM 1 comment:

Pope Francis is open to discussing the ordination of married men in Brazil.

Check this link...Maybe this is because Steve Bannon of Breitbart News has his problems with the church...

I have deep difficulties with Bannon going back to what he did to Shirley Sherrod in the Obama administration. Truth is truth. Yes, I know Breitbart is an alt-right site.

This is from Leonardo Boff from almost a year ago.

link Boff says Brazil could have married priests.
Posted by wild hair at 4:47 PM No comments: