Sister Monica And Her Ministry To The Transgendered Community 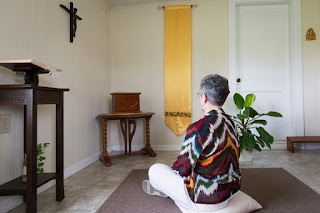 Sister Monica’s Ministry To The Transgendered...

Since Leelah Alcorn walked out in front of a tractor trailer truck on an interstate highway in Cincinnati last winter I have been trying to educate myself about transgendered persons.

Today this story about Sister Monica, a Roman Catholic Sister, caught my attention at the Huffington Post. For me Sister Monica is another one of those heroic nuns.

Sister Monica and her ministry to the transgendered community

Since first reading about Leelah Alcorn I have tried to learn more about transgenderd persons.  A friend who worked for a catholic religious order, told me this summer that she had a cousin who is trans. A good friend whom I am in regular contact with here where I live and is a therapist told me that he presently has three clients who are trans.

Another part of this article from the Huffington Post that attracted my attention is how Sister Monica, a Roman Catholic Sister, has to live in the shadows. Sister Monica according to the story lives a solitary life outside the boundaries of her convent and the Catholic University affiliated with her religious congregation.

Even in the age of Pope Francis a solitary life is forced on a Catholic Sister because of a backward theology of sexuality in the Roman Catholic Church. I identify with that solitary life because I am a gay man, a gay priest and have ministered in those shadows now for fifty years.

I just returned from meeting with a group of gay priests and brothers, a group I have connected with annually for at least the last twenty or twenty-five years. I was excited to be able to go this year. I have missed the past couple of years because I was caring for my aging mother.

There are several things I learned. There was a priest at the gathering, I had not met him before, I would call him a Vatican insider. He had strong opinions about Pope Francis. He stressed that Francis in large part is a media creation. My understanding is that the priest I was in contact with at this gathering knew Francis personally. He felt Francis was deeply homophobic. On the family synod he felt that the only progress would be some kind of administrative adjustment to people who were divorced and remarried. For me this sounds pretty realistic. Maybe there is room for miracles, but that will remain to be seen.

While there were wonderful opportunities to reconnect with old friends, I was pained by the story of one priest. He has been forced out of his order because in his ministerial life he came out as a gay man. He is now in the process of becoming an Episcopal priest. This is at mid-life for him. I have no regard at the moment for a church that claims to be welcoming when a priest who should be thanked for his years of service is forced out of his order and the church. I had begun to think that the phone where folks could call to report things they thought scary or heterodox was disconnected with the coming of Francis. It seems this is not the case.

So, I applaud Sister Monica and her ministry. I have a little knowledge myself of what it is to live in silence. For all the hoopla, the September visit of the Bishop of Rome to the United States may make some headlines. I do wonder whether it will advance the welcome or even understanding of the many gay, lesbian, and transgendered persons the Roman Catholic Church claims to care about. So much for the new evangelization