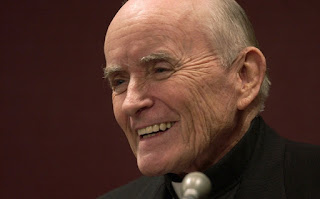 Andrew Greeley was one of my heroes, probably one of the earliest. I read that he had died in the morning paper which I don’t usually read but subscribe to for my elderly mother. The notice of Father Andrew Greeley’s death came on the day on which I observe very quietly the day on which I was ordained forty-three years ago today. I still function as a Roman Catholic priest to the chagrin of a few folks, although I am retired.

This morning I welcomed some of the memories. It was the mid sixties. The Roman Catholic Church was waking from its four hundred year slumber since the years of the Council of Trent. These were the years when the winds of the Spirit blew through the church and the world. These were the years of Vatican II with its promise of a renewed, modern, and participative church for everyone.

I recalled this so well today. I was preparing for the priesthood and was a very conservative and traditional individual. I have to say my classmates were more liberated than I was in those years. The highest virtue in the church at that time was obedience. I believed in total obedience. The man in charge of our formation, in retrospect, seemed to be undergoing a conversion himself. As part of our reading at meals our director selected this 1964 article from America magazine to be read for our reflection.

Andrew Greeley's Article in America on the "New Breed" from May 23rd, 1964

I am grateful to that person who was in charge of my formation in those days. Listening to that article by Andrew Greeley talking about the “New Breed” made me want to be one of them. There was something in that article by Andrew Greeley with the profundity of his analysis of the times that resonated deep within me that roused me to want to be part of the “New Breed”. I needed to catch up with the times.

Obedience was being dethroned. Greeley was talking about love. We wanted to be lovers. Obedience was still esteemed, but not without giving reasons and not without a real interchange and, yes, dialogue with the person in authority. For me the ascendancy of love and the dethroning of obedience arrived with the Civil Rights Moment and Martin Luther King’s marches for freedom. I recall a very spirited discussion when some fellow priests who wanted to go and march in Selma. Bishop Toolen, at the time the Bishop of Mobile, Alabama, was ordering outsiders not to come. In those days we used to say: “ A doubtful law did not apply”. There were bishops on both sides of this issue, so it was doubtful law. My confreres marched.

It seems that over the last two pontificates that the church has slipped back into a church which honored obedience over all. So when the new pope suggests that good, kind, and charitable atheists might be saved, there is a storm of criticism to the point where it seems the Vatican spokesman is correcting the infallible pope. Maybe love will prevail again in the church under Pope Francis.

It seems to me that it’s time for a new generation of "New Breeders". May Andrew Greeley rest in peace. Thank you for your service to the church. From your place in heaven,  send out some of the fire of your wisdom upon the present day Catholic Church.
Posted by wild hair at 5:02 PM No comments:

If You Heard Something Disturbing About Gay People Today, Consider Contacting Equally Blessed 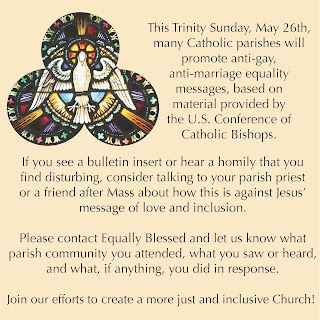 
"Dolan is perfectly free to expound on on the Roman Catholic understanding of marriage, but, in the United States of America (as in many other nations) marriage is at the discretion and under the law of the State. Many churches have ceremonies surrounding the occasion, and the R.C. Church even calls it a sacrament but NONE of them can perform a valid (meaning state-recognized) marriage without a license of the state. Period. End of discussion. Dolan is a myopic sectarian bully -- and I know where of I speak; he was archbishop in my city before going to NY. The fact is that marriage equality has already come to NY and nearly a dozen other states and he is pissed-off about that. Too bad. There is no way in hell the SCOTUS is going to uphold DOMA in such a way as to invalidate all those marriages but, being a bully, Dolan is throwing a tantrum about that which is beyond his control. I certainly hope that the IRS is keeping a close watch on the RC church as other states consider equality because I expect more illegal political action from them, and sentiment is stirring to remove the tax-exempt status of sects which overstep the boundaries of what is permitted of a tax-exempt organization."
Posted by wild hair at 1:49 PM 2 comments: