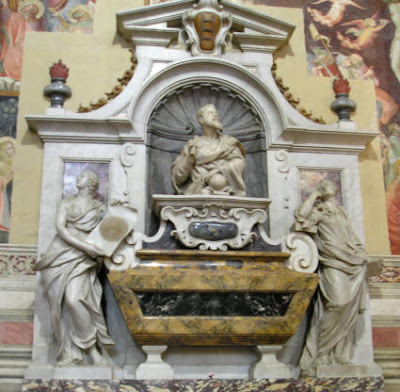 So today is the 400th. anniversary of Galileo’s telescope. I once paid my respects to Galileo in the Church of Santa Croce in Florence where he is buried. He is a hero of mine. Galileo was not afraid to question the established church authority.

It took the Roman Catholic Church 400 years to apologize for the treatment they gave to Galileo and to recognize his scientific discoveries.

The Catholic Church has made some advances over the years in making peace with the field of science particularly in the areas of cosmology and literary research that his given rise to a more scientific approach to understanding the scriptures.

It is sad that still today the Catholic Church cannot embrace any of the human sciences like psychology and sociology. If the church could do this then maybe it could update some of its teachings on sexuality, but that will likely take another 400 years. In the meantime millions will continue to leave the church.
Posted by wild hair at 10:11 AM No comments: