Vatican Ambassador Involved With Arrainging The Meeting Of Kim Davis With Pope Francis In September...Replaced 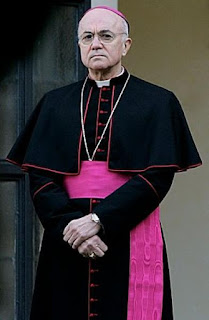 Some interesting news on a slow afternoon after the second super Tuesday. It's reported that Pope Francis is replacing the Vatican's nuncio to the United States, Archbishop Carlo Maria Vigano, with the present nuncio from Mexico who is a native of France, Archbishop Christophe Pierre. According to an article in America Archbishop Christophe Pierre is an experienced diplomat. He has been the Vatican's representative in Mexico for the last nine years.

There are two sources for the story at the moment. A blogger, Aximill, at Daily Kos posted this diary "Pope fires Vatican ambassador to the U.S. over Kim Davis." The headline might be a little exaggerated, but there is interesting information in the anonymous source the diarist uses suggesting the new nuncio because of his experience in Mexico could focus on immigration issues. That could be very interesting, given candidate Trump's desire to build a wall between the US and Mexico

The Daily Kos blogger, Aximill, documents Vigano's behind the scenes invitation to Kim Davis to meet Pope Francis during his fall visit to the United States. The blogger also notes Vigano's staunch opposition to marriage equality.

A second source this afternoon for the story is America magazine. 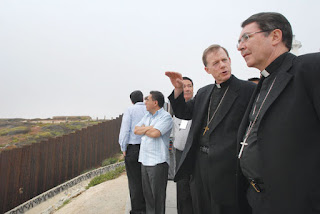 Intermountain Catholic
This picture shows the new Vatican nuncio to the US  looking at a border fence in Tijuana, Mexico in 2008.  Archbishop Christophe Pierre is at the left. The other prelate is Bishop John Wester of Salt Lake City.

The Link to the America story