I am still trying to find out how Todd Akin's anti rape sperm defense shield works. How does it deploy? Can it be made to work in non rape situations? If it did, what would the RC bishops' position be?

It does not seem the republicans know much more than I do. In the interest of public service and information I am publishing this Republican Rape Advisory Chart. It has appeared in a few places. I saw it at Dailykos.  Here:


The chart is above. 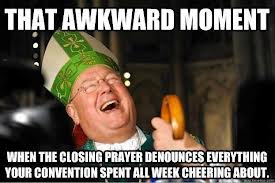 Folks have been complaining about the tone of this 2012 campaign in the US. First of all the  Republican Party needs to reform its act if they want to survive as a viable voice of democracy. I say this because it seems that the whole process in this election cycle has been poisoned by the obscene amounts of anonymous money flowing into the campaign. The more important issue for republicans is the level of ignorance and hate that has been directed at President Obama.

The US Catholic bishops have been complicit in the debacle of the 2012 election. I would hope his eminence; Cardinal Dolan will be polite and try to be even handed at the Al Smith Dinner tonight where both Mitt Romney and Barack Obama will be his guests. There should be no partisan prayers.

Dolan and his cohorts deserve to lose the tax exempt status for the catholic church for the way they have acted and inserted themselves into this election. The US bishops under Cardinal Dolan need to reform. The US bishops under Cardinal Dolan bear some share for the ignorance and hate that have marked this campaign. The bishops talk about freedom, but they have really shed no light on this election other than to posture to take away others’ constitutional freedoms. Their scream for religious liberty is a move to take away freedom guaranteed by the Constitution. The bishops have not acted like shepherds concerned for all the flock. They want to be politicians. They have succeeded. They may say they are following the lead of Pope Benedict. Yet bishops have a lot of freedom to speak out in their own dioceses. Mostly they have spoken to aid and abet the worst of republican hate. If the bishops cannot change, they need to be replaced by real shepherds.

The bishops for their part have fueled the level of ignorance and hate that has specifically been directed at the president. This account is from a person who attended a Mitt Romney campaign event. The event involved watching the second debate between the presidential candidates around a large screen TV. The writer comments on what he heard.  This is what he reported. My question is have the bishops tried to bring any kind of civility or honesty to this debate and this election? No. They might as well been some of those gathered around that tv screen.

Now, I remember I was not happy with George Bush when he “won” the election in 2000. I recall that I cut him slack after 9/11. The worst that I think I ever said about him after Kerry lost in 2004 was that Bush was not my president.

I have a very difficult time understanding the level of ignorance and hate directed at President Obama in this election cycle. A person just has to listen to the republican minority leader of the Senate who said his main goal was to make Obama a one term president. Then, there is the obstruction led by John Boehner in the congress against any kind of movement to create jobs which was the so called republican alarm call for 2010. Why don’t the US bishops call this out? I mean, Mr. Boehner is one of their sheep.

Given all this, I really wonder about the sanity of people taken in by all the republican hate. I wonder about the pastoral instincts of the US bishops who have aided and abetted this mess. It may be getting a little late to save democracy or sanity. Maybe the UN can offer the US a rescue mission and some mental health counseling. The US bishops could be the first in line.
Posted by wild hair at 6:33 PM No comments: