A Few Thoughts On The Pope's Airplane Presser 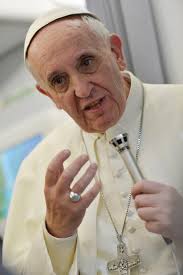 I am in the “yes and no” group of those commenting on the significance of Pope Francis’ statement that he would not judge gay priests. It is significant that Francis used the word “gay”. It is probably the first time, as many news reports are saying, that a pope has publically used the word. I think that is significant.

I remember when I first started to use the word “gay” to describe myself and how the word would get stuck in my throat. Over the years I could talk about myself as homosexual because I was aware of my orientation from a pretty early age; but using the word gay to describe myself at mid life as I was really in the process of trying to  own and integrate my sexuality in a more profound way was a big step. A friend of mine describing my journey said that I not only opened the closet door but ripped the door off the hinges.

Pope Francis’ use of the word “gay” is also significant, if it is true, that as the archbishop of Buenos Aires he was supportive of gay civil unions as a compromise in the movement toward full marriage equality. Taken together the pope’s use of the word “gay” and his seeming support for civil unions gets us past the US bishops’ fit, called a “fortnight of freedom”. It also gets past Cardinal Dolan’s “dirty Freddy” analogy.

It is significant, too, if finally the pope’s use of the word “gay” gets beyond the “intrinsic disorder” characterization that Cardinal Ratzinger, later Benedict XVI, used to describe the homosexual orientation.

I don’t think the pope’s use of the word “gay” is significant unless he will find some other way to update other parts of the church’s understanding of sexuality. The news reports all seemed to indicate that Francis’ use of the word “gay” was situated within references to the Universal Catechism stating that all homosexual acts are wrong and the fact that the ordination of women was settled.

It seems like a step forward has been taken. It might be akin to some cardinal saying to himself four hundred years ago that maybe it is true that the sun is the center of the universe. It only took four hundred years for the church to come around and apologize to Galileo for his mistreatment by the church at the truth he spoke. I hope the church’s updating of its understanding of sexuality does not take as long.


Well this is refreshing. The exact quote and source escape me. However, someone said if you are an evangelizer and  preaching the gospel and your people are dancing in the city square, you need to be there dancing, too. I think Francis is on to something.

Flash Dancing in Rio
Posted by wild hair at 7:07 PM No comments:

Yesterday's Homily on the Good Samaritan 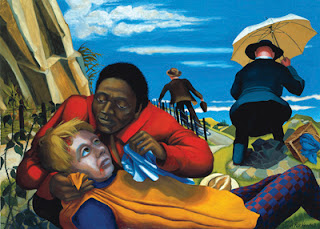 This is something I wrote. It is yesterday's homily for the 15th. Sunday in Ordinary Time. I was a substitute in a real RC parish, mostly white and German background. Reactions are always interesting.

I have never posted one of my homilies. My reason for doing so today is that I quote Pope Francis. I may have mentioned or quoted the pope in homilies over the years, but nothing to this extent. I am still holding my judgment on Pope Francis.

It is a relief that Pope Francis has put aside all the denunciations on gay marriage, birth control, and abortion. I will be interested to see where he goes with all that. For now, his style and message is refreshing.

Here's the text of the homily, if you care to read.

This gospel parable of the Good Samaritan from Luke certainly gets into our imaginations. You only need to think of all the hospitals and ministries name Samaritan or Good Samaritan.
The Parable of the Good Samaritan illustrates well Luke’s understanding of Jesus as compassionate and looking out for outcasts, those on the fringes of society. The story of the Good Samaritan is only found in Luke’s gospel. If you want a couple of other examples of how Luke presents Jesus in his gospel as compassionate and focused on people on the fringes, there is the parable of the Prodigal Son and the story of the healing of the ten lepers where the only one who comes back offering thanks, is once again a Samaritan. These parables are only found in the Gospel of Luke.
Part of the reason this parable of the Good Samaritan gets into our imaginations is that it is such a good story. Jews and Samaritans did not get along. It is the Samaritan who stops and takes compassion on the victim of the robbers, not the priest or levite in the story who are both Jewish Temple functionaries. When Jesus asks the question: “Who do you think was neighbor to the man who fell victim to the robbers?" The scribe cannot even say: “The Samaritan." He simply answers Jesus’ question by saying: “The one who showed him mercy.”
Perhaps Pope Francis was looking ahead to this gospel a week or two ago. It was the Fourth of July weekend. While we were contending with lots of rain, the pope on July 7th. took his first trip outside of Rome since being elected to visit the tiny island of Lampedusa. This island is located midway between the northern coast of Africa and the large island of Sicily.  There are about 5000 inhabitants on the Island of Lampedusa who earn their livelihood in the tourist industry or by fishing.
That tiny island in the Mediterranean has become a stepping stone for many migrants and refugees fleeing Africa to escape poverty and political unrest there particularly after the Arab Spring. They are fleeing to find hope for a new life in Europe. Recently a number of folks trying to reach Lampedusa died trying to make the trip. The pope wondered what he could do to support those refugees and migrants as well as the native people already living on the island.
The pope’s trip generated a good amount of media coverage, but we may have missed it because of the holiday and the glut of other news. I just want to highlight a couple of remarks from the pope’s homily that day on the island of Lampedusa.
The pope greeted many of the migrants presently living on the island waiting to get to the mainland. Many of the migrants were Muslim and were fasting in preparation for the Feast of Ramadan. Pope Francis also thanked the people of Lampedusa for taking these strangers in and caring for them. He praised these islanders for rising above selfishness in the face of what the pope called the “globalization of indifference”.
Pope Francis said: “Today no one in our world feels responsible; we have lost a sense of responsibility for our brothers and sisters. We have fallen into the hypocrisy of the priest and the levite whom Jesus described in the parable of the Good Samaritan: We see our brother half dead on the side of the road, and perhaps we say to ourselves; ‘poor soul’! And then go on our way. ‘It’s not our responsibility’…” The pope describes this globalization of indifference; “We have become used to the suffering of others; it doesn’t affect me; it doesn’t concern me; it’s none of my business!”
What do you think motivated the people of Lampedusa in the pope’s words to rise above this “globalization of indifference” and respond to these brothers and sisters in need? What do you think motivated the Good Samaritan to be a neighbor and help the man who fell in with robbers on the way from Jerusalem to Jericho? I’d suggest an answer to these two questions. The people of Lampedusa and the Good Samaritan listened to their heart. Often it’s our over rational head that keeps us from being neighbor, from making something our business and showing concern.

There are these few lines from the first reading from the Book of Deuteronomy that answer those questions for me about the people of Lampedusa and the Good Samaritan. The text says: “There is nothing mysterious about God’s law. It’s not far distant. It’s not hard to understand. It’s not up in the sky. It’s not across the sea.  No it’s something very near to you, already in your mouths and in your hearts. You have only to carry it out.” I think that describes the Good Samaritan and people of Lampedusa very well. Listen to your heart.
Posted by wild hair at 5:04 PM No comments: