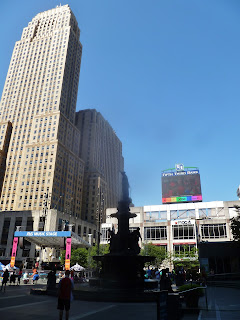 At Pride 2016 in Cincinnati there were lots of tributes to Orlando and those who died in the Pulse Gay Bar.

The first difference I noticed were two fully armed Cincinnati police officers in riot gear at Fountain Square. They were in the background, but when the parade began they moved up very close to the parade route. They seemed to be carrying AK-15 assault rifles, but I am not a gun expert.

The Grand Marshall of this year's parade was the mayor of a small enclave near Cincinnati called Golf Manor. The mayor's name is Ron Hirth. He was elected last November and is Ohio's first openly gay mayor according to Equality Ohio.

There were politicians and politicians running for office. I found that helpful if I can remember them when November comes. Cincinnati's first openly gay council member, Chris Seelbach, appeared early in the parade.

There was a large group of Hillary supporters and also a very large group marching with Procter&Gamble whose world headquarters is in Cincinnati. P&G has been very supportive of the GLBTQ community. Procter & Gamble also supported the equality movement for marriage. They had a large group and they carried signs with photographs of the victims of the Orlando massacre.

It was hot and I finally moved on to a favorite spot for a little lunch. I wore a gay themed necklace, a silver triangle hung with hoops of rainbow colors. I ate alone. My waitress was Molly and friendly asking questions as she appeared and then moved on. At one point she said that she liked my necklace. I told her a friend gave it to me many years ago. Finally, it was time to go and pay. On the receipt, Molly wrote with a hand drawn heart introducing her remarks; "Love knows no labels." I guess I was not totally alone.

This is from my handwritten journal entry dated November 14, 1986. The place is Halsted Street in Chicago and the bar was called Christopher Street in 1986. Now the bar is called Hydrate. I was 43 years old then. I also call it middlescence. Sometimes it takes that long to really own who you are.

I post this to honor the lives of those lost in the attack on the Pulse Night Club in Orlando. I want to honor their courage, their search, their youth, and their openness. I also post this because catholic leaders have been negligent in recognizing that this was an attack on GLBTQ persons. It was also an attack on a place where gay men could find themselves.

I continue to remember in a private and personal way those lives lost in this horrific attack on a place of safety for gay and lesbian people and their friends.

My reactions. I found a place at the bar with a bit of space around me, pulled a stool over and sat down. Shortly a man came by, put his arms around me at the shoulders from the back and I thought; “gee that was quick.” I realized I was sitting in an over the counter entrance to the back of the bar. I sat for about two hours there. I tried to observe what the protocols were. Most fellows were there with a friend. I was alone which has been part of the story. I tried to catch a couple of guys eyes but got no response. There were already a few fellows who already had too much to drink. Most were young and very good looking. They didn’t look frightened. They didn’t look particularly maladjusted. One small and very young fellow came in stood against the wall and soon was drawn into a conversation. There was something, I’m sure going on in the other part of the building. Conversation was slow for me. I think I might have been sitting next to two priests. They were a little over dressed. They never seemed to invite an opening to talking.
Posted by wild hair at 7:48 PM No comments: