Now It's A Mystical Experience... 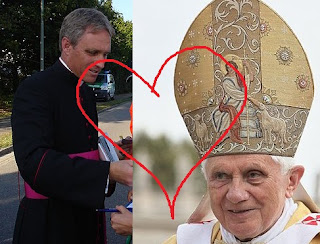 In his latest explaination for his resignation, Benedict claims it was a mystical experience.
Francis' charisma confirms that this was God's will.

Perhaps, Benedict was just starting to feel good about himself for the first time in a long, long time. Benedict claimed that his resignation was a good thing and must be God's will because there has been such a warm response to Pope Francis.

I think that maybe Benedict realized that he was tired and worn out from being an intrinsically disordered pope. In February when Benedict announced his resignation, Andrew Sullivan raised some questions about the pope's motivation and more about the special arrangement with Georg.
What about this relationship between Benedict and Georg?

Pope Francis liberated him. “If someone is gay and he searches for the Lord and has good will, who am I to judge?”

Recently, another Jesuit, Fr. Frank Brennan SJ, an Australian, said in an interview that he did not think it was helpful to talk about the homosexual orientation as a disorder. This is what he said: "It's time we dropped the unhelpful, judgmental language of intrinsic and objective disorder when respectfully trying to determine appropriate laws and policies for all people who want to support and nurture each other and their children."
Reflection of Fr. Frank Brennan

Father Brennan is talking about a recent interview conducted by Australian television which included Penny Wong, an openly lesbian politician who with her partner is raising a child. This is what Fr. Brennan said: "Much of the two-hour discussion was not put to air by SBS. At one stage of the discussion in addressing Penny Wong, I said that I found talk of homosexuality being a disorder unhelpful. Addressing Penny Wong, I said that I thought her homosexuality was as natural, complex and mystical as my heterosexuality."

Could it be that Francis was talking about Benedict and Georg? Could this be the source of Benedict's mystical experience?
Posted by wild hair at 4:55 PM No comments: