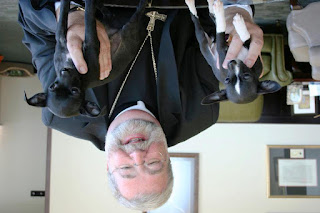 
Here: Diary on Jenky on DailyKos
and here: Article at Think Progress

Jenky is reading from the bishops' playbook and seems to have gone over the top. His mind is scrambled. I thought Obama was the socialist. Jenky has Obama coming after the catholics, but it really seems like Jenky and his version of the church are the ones coming after Obama and his followers. I mean Jenky and his republican cohorts have even been calling Obama the socialist.


I will be polite and not go to the extreme of suggesting that maybe Jenky is the nazi.


It does seem like it's time to speak out against bishops like Jenky. He's from Peoria. So what would you expect. 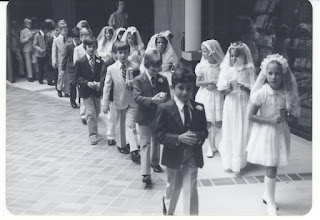 A foolish obedience is the hobgoblin of little minds, adored by little statesmen and philosophers and Polish and German popes.
I paraphrased Emerson because obedience in today’s catholic church has become the new foolish consistency. Obedience is elevated as the highest virtue. It is a tragedy that this kind of consistency much beloved by small and insecure catholic minds finds support in the Vatican.
I encountered a story about this kind of foolish obedience at the blog Enlightened Catholicism, and it got me thinking. I appreciate what Colleen unearths on her blog. Her comments are always insightful as well as many of the follow-up comments.
The blog article is about Father Adrian Egan of Mount St. Alphonsus Monastery in Limerick, Ireland. Father Egan complains publicly about the treatment of some of the priests in his group. One priest in particular, Father Flannery, a popular retreat director had been reported to the Vatican by these conservative church police. Father Egan calls them “Catholic agents”. He said these "agents" were subjecting some priests in his order to FBI-like attention.
Blog at Enligtened Catholicism about "Catholic agents" Reporting Priests
The story continues that Father Flannery was reported to the Vatican for some deviation from the catechism. Father Flannery was called to the Vatican to defend himself. The result is that now Father Flannery is forbidden to write in the Redemptorists’ magazine or publish on the order’s web site. This article in the Irish Examiner details more about these events.
The Article Quoting Father Egan about "Catholic agents"
Obedience as the new foolish consistency may give those embracing it a sense that it keeps the group together and provides order; but this comes with many serious negative consequences. I wonder how the church got itself into the position where it will silence creative and original thinkers and theologians who spend their lives trying to make faith understandable and allow the Mystery of the Catholic faith to stir our hearts then discard them as today's rubish. The Vatican for its part reacts to these reports from scared, small minded people fearful that there is a violation or opposition to what's in the universal catechism by silencing dedicated and creative people.
A person does not have to be a genius to tell when someone is coloring outside the lines. It also does not make that person an art critic. In the church it seems that when these fearful people succeed in getting the Vatican to silence creativity the human spirit suffers. When someone’s fear of heresy based on the reading of the catechism causes this silencing of men and women of good will who serve the mission of the gospel, then true religion suffers. The Catholic Church suffers.
In the thoughts and words of two artists the problem can be expressed this way. Georgia O’Keeffe said: “I found I could say things with color and shapes that I couldn't  say any other way - things I had no words for.”  Francis Bacon put it this way: “The job of the artist is always to deepen the mystery.” Theologians like artists try to say things and explain faith in a way to deepen our understanding of Mystery.The result of right wing conservative “church agents” denouncing creative theologians who in their own way are like artists kills the Spirit.  Benedict and his church "agents" seem satisfied with a coloring book religion.


UPDATE - April 11, 2012 - From Clerical Whispers
Statement from Association of Catholic Priests in Ireland
Posted by wild hair at 7:40 PM No comments:

What do one hundred and fifty Chicago priests know that Cardinal George does not know?

This article about Bishop Geoff Robinson was in the National Catholic Reporter. I missed it last week, and a friend from Australia alerted me. My friend tells me that Bishop Robinson was his canon law professor in the seminary.
NCR article

Following the New Ways Symposium Bishop Robinson began a speaking tour of the United States. According to the NCR article the ordinary in Detroit advised his priests to avoid going to hear Bishop Robinson when he came there to speak. It seems this was also the case in Baltimore.
What most interested me in the NCR article was the report that one hundred and fifty Chicago area priests attended Bishop Robinson’s talk while he was in the windy city. Now my question is what do these priests know that the cardinal does not know? At least the cardinal appears not to have instructed his priests not to go to hear Bishop Robinson. Maybe the pastoral experience and sensitivities of these priests have already informed them that there is something very inadequate about the present roman church’s official teaching on sexuality. Bishops and cardinals seem slow or reluctant to hear the same message.

An assessment of Vatican II as it ended was that one area needing to be addressed by the bishops gathered in council which was neglected was the area of sexuality. Looking back it might be this failure to address the topic of sexuality with the world’s bishops that began to signal the end of the reforms that brought so much promise and hope to many areas of the church’s life in the mid twentieth century. At least one scholar suggests that the reforms of the council ended in 1968 with Paul VI’s encyclical on birth control.
Adam Kotsko wrote in February:
“Fast forward to the aftermath of Vatican II, where a spirit of reform and openness to the modern world dominated — and one of the innovations of the modern world was of course The Pill. A council of experts recommended that the Catholic Church change its anti-contraception stance, but in 1968 the pope rejected their recommendation and reaffirmed the status quo in the infamous encyclical Humanae Vitae. In retrospect, this moment could appear to signal the premature death of the ‘spirit of Vatican II.’”
Article on Birth Control by Adam Kotsko at the Blog An Und Fur Sich
It could also be argued that the failure to address issues of sexuality in some way at the Council contributed to the present disaster of sexual abuse in the church.

According to the NCR article, after Bishop Robinson’s talk in Chicago, Sister Barbara Reid who is a vice president at the Chicago Theological Union quoted from John’s gospel: “the truth will make you free” (John 8.31-41).” She continued: “We have nothing to fear from speaking the truth.”

Hearing the truth on the subject of sexuality seems to be what a good number of Chicago area priests understand. It’s time to open the windows of the church again. Let the leaders of the church, like Cardinal George and many other bishops in this country breath the fresh air of truth as spoken by Bishop Robinson. It is past time for the church to have an open discussion on all matters of sexuality.