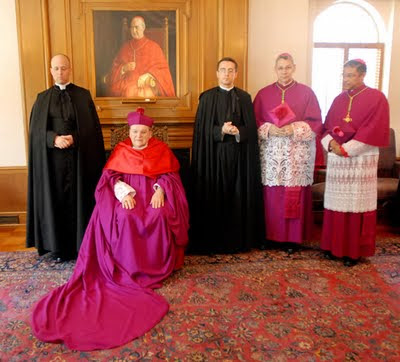 
There is a lot of talk today about the priest shortage. One of the ways some religious communities and dioceses have tried to deal with this shortage is to import priests from foreign countries. Bringing priests to this country from other countries is sometimes done without any preparation on either the part of the priest coming or the community to which they will be sent.

This is bad enough. Often this importing of priests from foreign countries is done in the name of multiculturalism. This is somehow meant to show the universality of the Roman Catholic Church as well as fill up for the shortage of native born priests. I think multiculturalism is


very important and a good thing. What I think is wrong is there are some subcultures that the Catholic Church does not acknowledge and in fact harbors a real animas toward. One such subculture is the gay culture which is very alive and well in the United States, and I would add in the Catholic Church.

This is an issue because the Roman Catholic Church particularly in the United States has not been able to accept even the smallest parts of the gay subculture within the ranks of its own priests and bishops. http://ncronline.org/blogs/essays-theology/alternate-thoughts-year-priests See issue #6 in this recent column in the NCR.

This lack of acceptance of the gay subculture manifests itself in a number of ways. Aversion to the gay culture presents itself in the Roman Catholic Church when it fails to address its own internalized homophobia. Gay people will tell you that it is the church’s inability to face the strata of gayness in its own ranks that is responsible for a number of the vile and hateful things said about gay and lesbians in some official church documents.

I suspect there is a high degree of latent homosexuality displayed in pictures like the one of Archbishop Burke that accompanies this post. You can also find this picture and a further comment about it here. http://gaymystic.blogspot.com/2009/09/closeted-gays-anonymous-association-of.html

When the church imports priests in the name of multiculturalism and fails to address is own internalized homophobia and to recognize the degree of latent homosexuality in the priesthood then I think this is a dishonest appeal to being multicultural. This is why I think bringing foreign priests to this country to alleviate the priest shortage is really doomed to failure. I think that failure will happen on several levels. That will be something for another post.
Posted by wild hair at 8:56 AM 3 comments:

Some Thoughts On the Ordination of Women, Sr. Louise Akers, Dr. Carol Egner, and Cincinnati

I am one of those people who support women like Sr. Louise Akers and Dr. Carol Egner. I also think there are solid reasons historically, scripturally, and theologically to support the ordination of women. An emerging field for recognizing the role of women and ordination of women are the studies being done into the non canonical gospels.

I do not know what Archbishop Daniel Pilarczyk is doing getting mixed up in all this since he is about to leave the scene as archbishop. Not too long ago he was thumping his chest saying that folks were considering him a liberal bishop. This may have been because he was not an advocate of no wafers for Obama supporters.

I grew up in the shadow of Our Lady of Lourdes parish belonging to one the neighboring parishes. From time to time I get back there and have noticed the drift back to pre Vatican II thinking in some of those big Catholic parishes on the west side. That is sad and disappointing. The parish I sometimes attend has gone from a place where we used to have dynamic preaching to sermons that are pitched to about eighth grade level. And, yes, the new pastor is a JPII priest. As I shop around for a parish with a good liturgy and preaching, I do not think I will need to go to Our Lady of Lourdes.

The women's issue and the ordination of women are not going to go away. For me the strongest arguments against those who favor an all male priesthood are that Christianity had its roots in the patriarchy of Judaism and that the canon of scripture was established by men. So you might get away with calling some of the non canonical gospels "gnostic" and not including them in the canon of scriptures. All male societies do things like that.

I think scholars are going to begin to find ways to challenge that kind of thinking. More and more we are going to discover religious meaning and value in those non canonical writings as research continues. As that movement grows it will wash over and silence once and for all those who would block the full equality of women in the church.
Posted by wild hair at 11:22 AM 2 comments: