The Super Blood Moon, The Church, The Pope...No Step Forward 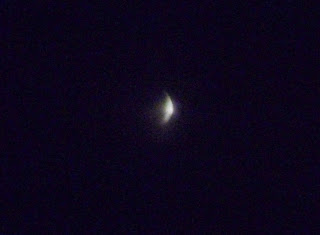 For a few moments last night I was in awe of the universe. I had dragged out a tripod given to me when I left the last parish I served. Then I mounted my camera on the tripod. I took a few pictures, but nothing great. I did see the moon at about half eclipse. Then I saw it at full eclipse. There was just a glimmer of light. There were some clouds so it was difficult to sort out.

The moment of awe occurred when I focused the camera on the moon coming up in the eastern sky. I imagined the sun to the west at my back. I was standing with my camera in the driveway focused on the rising moon then overwhelmed by the universal movement. Along with the earth I was casting my shadow on the moon. I have seen the blood moon before. I was hoping to see that. It was getting late so I retired.

This morning at 4:00 AM I woke and went back outside. I thought I might see that blood moon. The eclipse was over. The sky was much clearer. The moon was bright, full, high in the sky, and beautiful. I took a few more pictures and went back inside.

Then I started to reflect...a very good priest friend of mine always told this story about Cardinal Robert Bellermine. It was the time when the controversy was;  Is the sun or the earth the center of the universe?  Galileo determined that the earth moved around the sun. This was contrary to official church teaching. Galileo invited, so the story goes, Cardinal Bellermine to look through his telescope and then he would believe. Bellermine refused. The story continues that Galileo muttered to himself...It [the Earth]  still moves. Well we know the rest of the story. It took the Roman Catholic Church and St. John Paul the Great four hundred years to apologize for the church's error.

It's wonderful that Pope Francis is a scientist...a chemist. I am thrilled that he has moved climate change to the head of the church's agenda. I applaud the pope's other initiatives on immigration and concern for the poor.

My question? My wonderment? What about the human sciences like psychology and sociology and more specifically human sexuality?  It seems the Roman Catholic Church has not made room for this kind of science. What about the research into gender identity?  Why won't the church engage even in conversation with those who experience different sexual attractions?  Yes, Pope Francis may have brought the church into a new century, but the theologies that the church continues to hold on issues of sexuality and gender are still stuck somewhere back in the dark ages.

Not Welcome In Philadelphia... 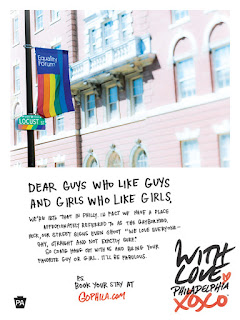 Pope Francis arrived in Philadelphia today. Speaking in heavily accented English, Francis gave a blessing, and then delivered his homily in Spanish, pausing regularly for an English interpreter.

In Philadelphia Pope Francis called for a “much more active engagement on the part of the laity.” I think the laity in Ireland spoke when they voted to approve same sex marriage this summer. My favorite article on this total upending of Catholic intransigence said that this happened because of all those pained and difficult conversations that began; “I have something to tell you.” Can Francis listen?

The Laity Speak...Ok, It's Ireland...Pope Francis' Secretary of State Said; "It's a defeat for humanity."

I have heard that the pope is deeply homophobic. He seems to have settled down enough that he still is still polite to the President of Argentina, a woman who supports same sex marriage in Argentina, the pope's home country. This is the best the pope can do, "It's a defeat for humanity."

Pope Francis’ own man, Archbishop Chaput has shut out, excluded, dismissed, and sent as far away as he could the GLBTQ persons who wanted to part of this World Meeting of Families Congress. They wanted to offer their experiences of family. I have so many anecdotal stories that if I could speak them, I think they would silence the archbishop and maybe nudge Pope Francis to welcome GLBTQ  people to the table and to that World Meeting of Families Congress in Philadelphia. In true form, however, Archbishop Chaput does not want to hear those stories. For the archbishop, I guess those stories are not important and really don’t count. Francis if you don’t hear those stories, I will completely doubt all your sincere calls to; “Hear the cry of the poor.” I will distrust all your invitations to dialogue. I may send a prayer even a good wish your way, but will you send a welcome to GLBTQ persons?
No Welcome Here

Pope Francis! We have heard your support for religious freedom which echos all those frantic and looking for money fortnight calls of US bishops to shun GLBTQ persons especially if they have formed long lasting and committed unions or simply desire to do that. I'd like to believe that you respect the religious freedom of GLBTQ persons. Why don't you welcome us?

Fr. John McNeil SJ is one of those people who has been a voice in the wilderness and a strong and intelligent advocate for GLBTQ persons. He is also a Jesuit like yourself. You must have heard something about him even as you visited out country because Fr. John McNeil, sj  died while you were in New York, John McNeil’s city. I met him, I think in 1994, at the Gay Pride Celebration in New York that year. I was in the midst of my own coming to terms with how to live out my gay identity. It was also the 25th. anniversary of the Stonewall riots.

Pope Francis, if you and your bishops, continue to exclude, despite all those nice words that everyone is welcome at the table and continue to exclude GLBTQ persons from the table, you might just as well stayed home in Vatican City.  Pope Francis, you speak of dialogue, but at this very Congress on Family a significant segment of the population living out their lives in family is excluded. There is no welcome so there is no dialogue.